skip to main | skip to sidebar

Since the kit that i bought does not include the entire range, i had to DIY some. One of the activity that i dont own is called the color box (3). It includes 9 sets of colors, with each set having 7 different shades of a color. I checked the website to see how much it'd cost me if i bought the kit- USD $60! So, i DIY using cross stich threads. I bought 7 different shades of red threads and roll it over cardboards like so. 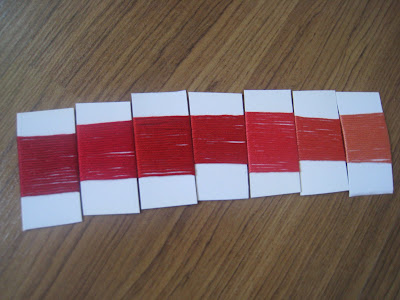 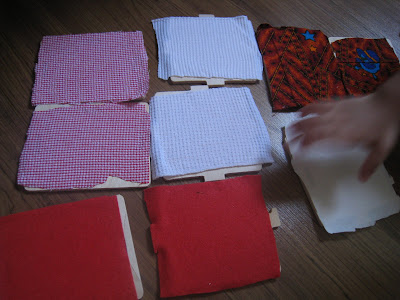 The other activity is called Touch fabric. It includes different cloth textures; the aim is to awaken the child's sense of touch. I went to buy wooden plates from DAISO, the wooden plates are suppose to be built into a box. But instead, i cut out old clothes and past them over the plates- see above. This cost me about $5 as well.
Honestly, after doing extensive research, i found that most Montessori materials can be made at home. It takes a bit of creativity and cost alot lesser than the proffessionally made ones. I also noticed that N masters the activity (those that i bought) rather quickly and i have to put them away soon after i introduced it to him. So economically, its much more worth to make your own than to buy. But of course, purchasing the materials save one alot of time!
Posted by Homeschool @ sg at 10:18 PM 0 comments

As i plan to homeschool N using the Montessori method, i decided (and convinced the hub) to buy a set. Here's a peak at what's in the kit. 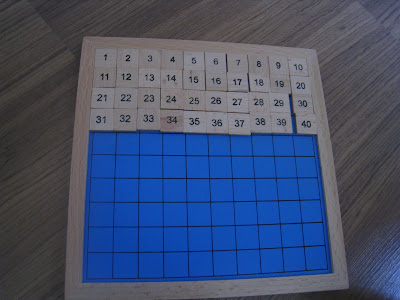 This makes up of a board and 100 small wood boards with the numbers 1- 100 printed on them. The aim is to have the child place the numbered pieces in sequence. This is to teach them counting and number sequence. 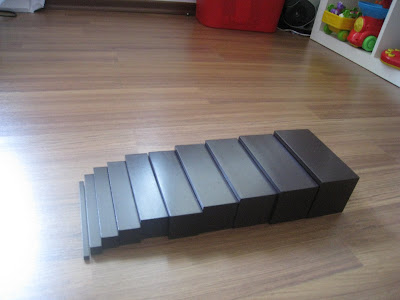 Brown stairs. The blocks graduate in thickness. The child is to lay them according to the size. This gives them a visual discimination in thickness. 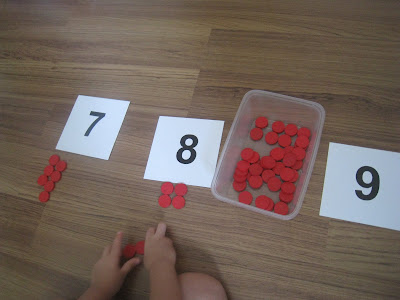 This activity teaches the child to count. He is to put the correct number of counters according to the number card. 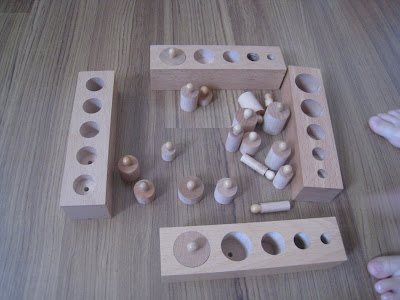 This is called the Knob cylinder. The cylinders varies in diameter and height. The child learns how to visually discriminate the different sizes. This eventually give them basic Mathemactic foundation.

There has been alot of discussion about Singapore's way of teaching Mandarin. Some claim that Mandarin lessons depressed, demoralized and traumatised them. Studies also show that Singaporean children don't score too well in Mandarin and many show no interest in the language.
While i have to admit, Mandarin wasn't my favorite subject in school but neither do i have any traumatising experience. I think the recent debate focuses too much on the methodology and many have neglected the fact that Mandarin, to start with, is a difficult language to master. I remember vividly that a Mandarin teacher conducted a survey by asking how many of us thought Mandarin was challenging. Most, if not all, even the top student in my Mandarin class, raised our hands. The teacher also acknowledged the same.
If you think carefully, its really no surprise. Mandarin words are made of symbols. One little dot can change the word to a whole new meaning. Not like English or even Malay, you can use phonics to sound out the word but for Mandarin, its immediate death. If you don't recognise the word, you don't recognise the word- that simple. There's NO such thing as phonics. And one character can mean one thing, put it with another character, it can mean something totally different. Pronouncing Mandarin words can prove to be diffcult as well. Its almost like singing.
From my observation, it seems that those who grew up in Mandarin speaking homes have better time mastering English than those from English speaking homes mastering Mandarin. Why? Simple, English is much easier to learn than Mandarin. Granted, most of my Mandarin speaking friends don't speak perfect English, but i would say their grammer, tenses are in place & they can be perfectly understood when conversing in English. But, i can't say for the same for people like me who are comfortable in English, we find it really hard to converse even in simple Mandarin. Alot of times, my Mandarin speaking friends have to switch to English for me and very seldom i have to switch to Mandarin- because they find it a torture hearing me speak in that language.
I personally think the solution to all this is, to start exposing Mandarin at home. Simply because it is easier for a child to master any language if they start from young. Look, the chinese children in China pick up the language with ease! If parents wait till the kids hit school, they may find it tougher to cope, having hit a age where they are not as absorbent as a 2, 3 year old.
But of course, the parent themselves must be fluent in Mandarin to start with. Unfortunately, its very common for Singaporean parents to be handicap in this language.
Fortunately for my son, i can read & recognise simple Mandarin words. I know enough basics to know how to pick new words up- all thanks to the Singapore education. So, while i cannot converse Mandarin with my son, i try to read alot of Mandarin words, play Mandarin DVDs for him, send him to Mandarin classes, teach him simple Mandarin words. I dont think these are enough to make him speak perfect Mandarin but i sure hope it gives him enough foundation for him to build on when he is in school.
Posted by Homeschool @ sg at 12:23 PM 0 comments 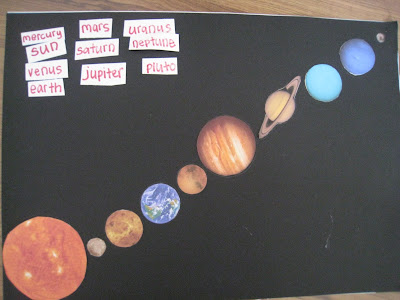 After successfully teaching N the world continents using Montessori method, i decided to use the same methodology to teach him the solar system. I searched and printed out the different planets, cut and paste them on a black background, like so. I also made my own labels by writing each planet name on a small cut out cardboard (nice size for the toddler's hands).
Using labels, i taught him the planets and their respective positions in the system. N picked up the concept quickly and was able to identify the planets & match the labels with its respective planet after just 2 lessons! 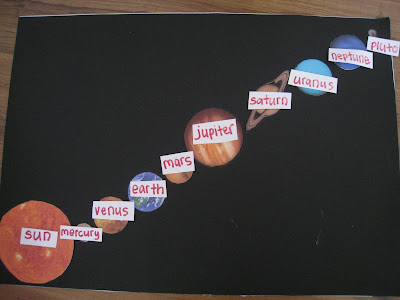 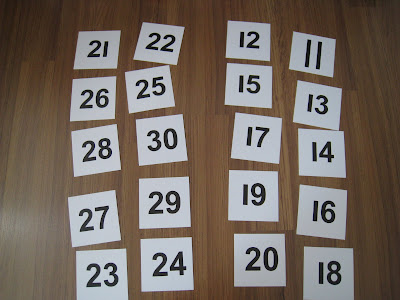 This is how i teach N number sequence. Again, i use flashcards method to drill in him the sequence. To reinforce his learning, I lay the number cards randomly on the floor and have him give me the cards in order starting from 0. At this moment, he knows the number sequence from 0 to 30 & im flashing the numbers from 31 to 40 at the moment.
Posted by Homeschool @ sg at 11:52 AM 0 comments 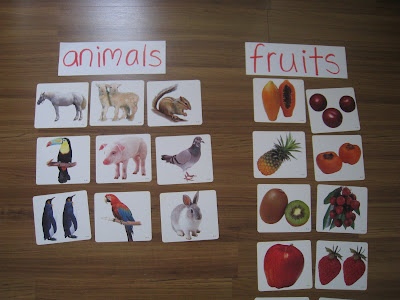 I used flashcard method to teach N classification. To see if he really knows it, i took out the 2 word card 'fruits' and 'animals' and lay it on the floor. I gave him one picture card at a time and ask him to place it under its respective category. 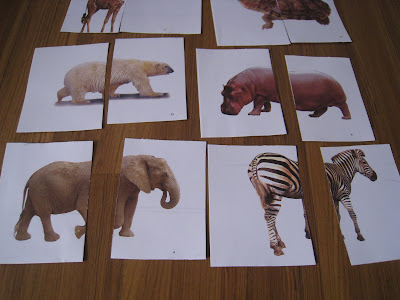 I saw this activtiy in Youtube. I photocopied some of the animal flashcards that i have and cut them into half. N is to match the body parts to the head of each animal. I thought this was a good activity to reinforce the image of the animals in the child's mind.
Posted by Homeschool @ sg at 4:39 PM 0 comments 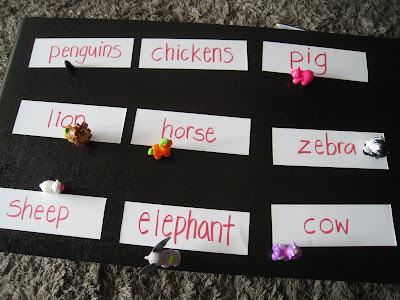 Ive taught N to read using flashcards since he was 5 months old. By about 10months he was able to show that he could read.
Now, i stopped the flashcards but designed some activities (oh well copied from Montessori) to reinforce the words he learnt. I took out some old flashcards (on animals) and displayed them on the coffee table. I gave him his animal toys and got him to match the animals to the respective word cards. He loves this game!
Other than animal word cards, i sometimes would whip out world flags picture cards and have him match the world flag its respective word cards. Oh and not forgetting Mandarin words as well! In the below picture, i got him to match the colored lego to the Mandarin word cards. 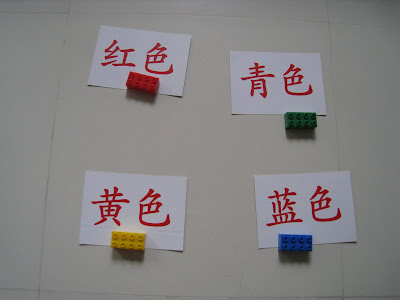 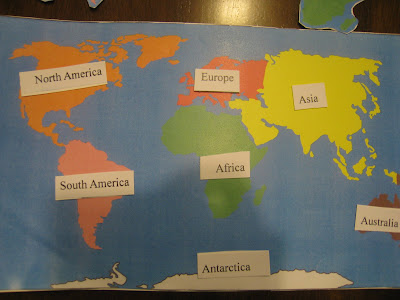 The sonshine was interested in world flags and looking at the world map. So i grabbed the chance to teach him world continents. I got this continent template from online and had it enlarged at a local printer. The word labels (see above picture) are movable. I used it to show the sonshine which label match which continent. 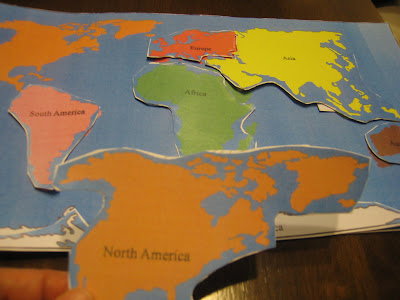 Ive also cut out each continent shape (see picture above) and have him match the continents on the map. Its easy because each continent is color coded!
This activity is easy to teach (and cheap, cost me only $6) and for the toddler to learn. The sonshine was able to identify each continent and its specific location on the map in no time.
Posted by Homeschool @ sg at 1:14 PM 0 comments

My bank of ideas!